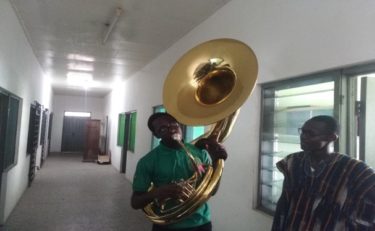 Music in Tema international school is one of the pivotal subjects within the Arts that develops students’ talents and prepares them for the world’s stage. At TIS, music is not only a co-curricular activity, but also an examinable academic discipline within the IB MYP, DP as well as IGCSE curriculum. In our quest to develop the interest of our music students in terms of performance, composition, analysis, appreciation and career choices, the music classes of Grades 10, 11 and 12 embarked on a field trip to the music department of the University of Education, Winneba. Do you want to know what really happened? Read the reflections by students below. 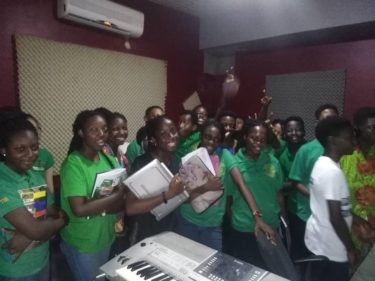 When we arrived at the central campus of the University where the creative arts department is located, we were warmly welcomed by some of the music lecturers. After that we were taken round the school for a sightseeing, a semi tour around the school. This helped us to improve our knowledge on some instruments we were oblivious to, example the sousaphone which I got to play myself for the first time. For me, this moment turned out to be one of the many highlights of the trip.

I was also generally amazed by the level of talent some students showed through their performances at their lunch time concert organized by the school every Thursday. I was extremely impressed by the last group of performers which played a piece composed by one their members named “Allah Wakubah”. This performance involved my personal favorite instrument, which played a lot of improvisation alongside the flautist who also had an impeccable skill for improvisation. However, the instrumentalist tended to disregard the use of dynamics, causing all instruments to overshadow each other throughout the piece.

I saw the difference in talent and acquired skill in the trumpet players. Even though it was not quite clear to many, it showed vividly due to only one trumpeter being mainly involved in the improvisation which has challenged me to really polish my talent take my practice very seriously. As to what can be changed, I would say the level of seriousness showed by the students of the Winneba University of Education (Creative Art Department) who made up the audience could be improved as they often made excessive noise throughout the performances. This caused some performances not to be enjoyed to the fullest. ~ Kwasi Ankama-Asamoah

Last week Thursday, a couple of music students from Grades 10 – 12 had the privilege to visit the Creative Arts department of the University of Education, Winneba. As soon as we arrived, we instantly felt the creativity in the school as there were so many different art related courses and classes going on from dance classes to different musicians rehearsing that could all be heard from all areas of the school.

Surprisingly, my attitude before the trip was completely changed after spending about six hours with the musicians and touring the school. We were warmly welcomed by one of the professors and straight away we were given a tour around the different arts departments which included a tour of the recording studios, rooms specifically dedicated to a certain group of instruments, a huge mirror room allocated to the dance majors and the amazingly designed theatre for the drama majors.

Later, we were lucky enough to experience the lunch time concert organized by the music department of the University and even performed solos accompanied by some of their students during the concert as well.

The music performed by the University students was really amazing and engaging and what made the performance even better was how the musicians enjoyed themselves whiles they played. This trip also gave me a feel of what studying music in university could be like and what you could do with a music degree after graduating. Overall, I had a really fun time and learnt a lot and hopefully another trip could be introduced. ~India Agyeman 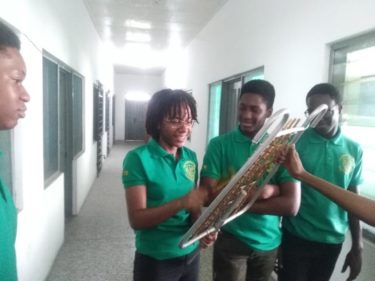 Our excursion to the Platinum Music Centre otherwise known as PMC was a fun and educative experience. During the course of this trip, I learnt many methods by which beats can be mixed, as well as the requirements and methods that can be used to produce a good beat. I also learnt about the various components that come together to make the everyday songs we hear.

I was informed about the different types of software applications that can be used to mix beats such as FL studio. I was also taught about multi-tracking which is the process of being able to record multiple instruments at a time.

This trip gave me a great deal of new knowledge which can be applied in music class to make learning easier. I think this trip was very necessary in order to allow me to get a better idea of what I will be doing in the classroom and in future assessments. ~Ekua Essel

On Friday, 22 February, 2019, Grade 7 to 9 music students went on a field trip to Platinum Music Centre and in the course of our trip, we got to understand basic concepts and have a better understanding and music producing led by PK (his preferred name). He was an apprentice music producer and he taught us about music producing and its essential requirements. For example, a Digital Audio Workstation (DAW) is a tool used to make a different variety of beats. Below is a picture of a DAW:

In the course of the trip we also learnt that some basic types of DAWs which are normally used for creating music and some of them are:

A channel is a tool used to control the volume and the sound of a musical instrument. For example, different instruments are placed on different channels on a mixer board to create a blend, under signal flow. For easy identification it is written in numbers.

In a mixer there is an XLR cable which connects the Mix to the Mixer. Therefore, with this information given we had two music students trying to record their original songs. Christal recorded hers and Seyram Apkatsa performed his song (Dell Faux).

During the trip I realised that in order for a music producer to help in the creation of the song, it is very necessary that you understand the basic necessities and requirements of music production. ~Eugene Joel Cobinnah

On the 22 February, the music students of Grades 7 to 9 went on a trip to the Platinum Music Center in Accra in which we had to remove our shoes to enter. The trip was truly exciting because at first when we looked at the building it didn’t really look that nice but then when we entered it was amazing, like the quote says: “don’t judge a book by its cover”. In the studio there were two parts which were the live room and the control room.

During the time at the music studio we were first introduced to the live room and then we talked about things like the audio link which connects all sounds to the control room, the line out wire which takes the feedback from the base guitar to the audio link and then to the mixer in the control room, the acoustic panel which absorbs sound which prevents sound from leaving the room. We also learned that it is recommended to use foam but if you don’t have any, you can use an egg crate and that you cannot not just change the design of the egg crate because it is highly important. 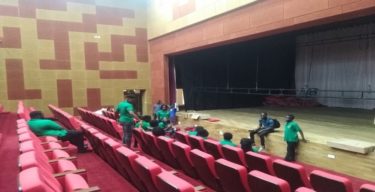 We also learned about the sound card which is a device that sends signals from an instrument to your DAW, the mono channel which is one channel like beat pills and stereo channel which is two channels like headphones, the fire wire cable which can be 800 & 400/ USB cable and it is the cable that is connected to the soundcard and the driver in the soundcard is the software that allows the computer to recognize the sound card being used. The brand of the sound card was Behringa in case you would like to buy one. Another thing I learned was that every digital mixer has an inbuilt sound card and each channel is given to individual instruments. I was so surprised when I heard that some musicians like Nii Okai and Bernice Ofei had come here.

But what I really picked up from the trip was the process of recording a number of instruments and the same time which is called multirack. In order to do so you will need to connect the instrument to the channel on the audio link then to the XLR cables which are plugs and then to the channel on the mixer. After hearing about all this we could the time to ask a few questions that we wanted to know about music producing. I was so happy to hear that the DAW which is digital audio workstation I worked on was used by them which is Cubase 5. I encourage all aspiring and current music producers to use this DAW. Anyway this trip was really helpful because it taught me a lot of new terminology and ways to use FL studio which is the DAW we are using to create a beat for the artist.

But the key things to take out of this reflection is the:

And they have all been defined in my own words above. ~Moyosola Fajemirokun

Enjoy the rest of your day