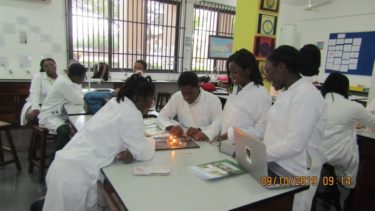 These conductors are used in the formation of circuits. A circuit defines the path travelled by electrical current. It could have a single loop or several loops depending on several factors. This variation in circuit designs is what has given rise to identification of some circuits as series circuits and parallel circuits. For every electrical circuit, there are several components that give evidence that current is flowing in a circuit is called the load. Examples of loads are light bulbs, fans, air conditioners, etc.

Some MYP 5 (Grade 10) students carried out some experiments relating to the above by connecting two light bulbs in series and parallel to verify Georg Ohms law. Their reflections are given below:

“The physics experiment we conducted on series and parallel circuits, I must say was a very edifying experience. We had the opportunity to visualise all of what we have been learning so far and also unlike the traditional circuit make up we were able to do extremely odd and different combinations to test the different and the most effective ways in which these connections can be done. We improved our ATL skills, such as communication and thinking, and this was very beneficial to us.” ~Adeline Adjei

“The experiments based on series and parallel circuits were a challenge, but I grasped some certain facts and gained knowledge like: A parallel circuit is a closed circuit in which the current divides into two or more paths before recombining to complete the circuit. Each load connected in a separate path receives the full circuit voltage, and the total circuit current is equal to the sum of the individual branch currents.” ~Rudolf Dogbegah 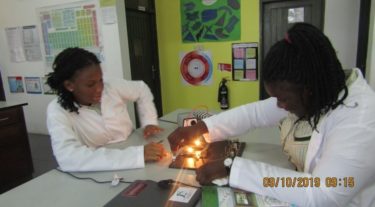 “I was disturbed at the beginning of the experiment because my partner and I had difficulties in conducting the experiment, but after seeking the help of others, I experienced the fun of it. I mean it has helped me to understand the concept of robotics. I have had an excellent amount of knowledge about electronic components and circuits. Thumbs up to Mr Castrol.” ~Kevin Cudjoe

“The experiment has assisted me to gain knowledge on how to properly place circuit components on a breadboard to form a parallel or series circuit. This knowledge has been very crucial and is the very reason I feel I have understood the unit. While I was doing the work, I had to research about the topic meticulously and diligently acquiring valuable information which helped me to complete outstanding work.” ~Bernard Obeng

Thank you for being part of the TIS family.