My Personal Project was a book that took the experiences of TIS students, straight from their small book. I wanted to do this because coming to TIS there were a lot of things that I wish I had done or known or even been prepared for, but had not. I wanted to write this book to tell people that ‘You are not alone’, and ‘someone else feels the same way’ because there were times that I felt I was the only one experiencing this. 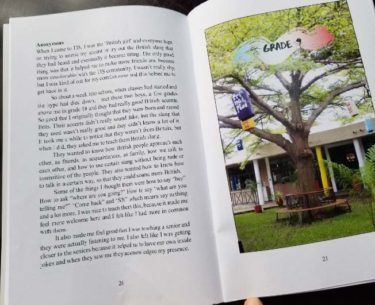 I started the Personal Project clueless as to what I was going to do and the only thing I knew was that it was going to be a text. I already knew that I had to pick something that I was passionate about in order to keep myself motivated throughout. But what? I have to admit, not a lot of things motivate me and I did not want to do an awareness-raising campaign because I felt it was overused (but kudos to all those who did and thrived) and it was not really my style.

The idea actually dawned on me one day as I was complaining to a classmate about one thing or the other. The person made a comment I really related to and then it struck me that I could do this.

I could inspire and invoke this same feeling onto other members of the TIS family, whether new, old, entering or leaving. I knew I would be able to do this and I knew I was definitely interested in this.

The project itself was terribly stressful, because of how fast and furious everything is and my need to do the best I possibly could.

I interviewed students, typed out their stories and ended up doing much more than I had planned.

I designed the book cover, using pictures of special areas in the school (credit to Elinam Janine Apreku) and I even had to pick out the type of binding and paper I wanted to use, something I was unaware I needed to do. But I still persevered. 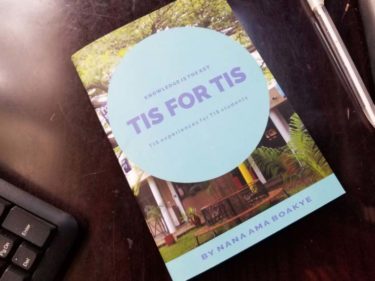 All this is not to say that I found the project easy, or that it was even smooth sailing throughout. If anything, it was otherwise, but I gained so many valuable experiences that I will use in the future. These include the ability to balance many projects/tasks at the same time, plan my schedule according to what I have to do, be a good communicator and prioritise some aspects of my day to others.

When I actually wrote and printed out the book, I felt so accomplished and self-satisfied, because I knew that I had done it. I could do anything I set my mind to and nothing could pull me back if I really wanted to. All the setbacks I faced, whether by my own hand or, otherwise, had only served to give me ideas and make my project much better.

In conclusion, the MYP Personal Project has not only helped me to undergo challenges with ease but has also helped me to become confident in myself and in the actions I take.