The people of Prampram celebrate Homowo to hoot at hunger, not only for joy but to mock the hunger that almost killed them. The people wore red and black and followed the paramount chief who was accompanied by his elders. The chief when proceeding through the community sprinkles kpekple, which is made of palm nut oil and corn dough. ~ (Eleanor Adjei – MYP 5 Drama)

The dramatic elements and forms I observed from the festival were costumes, dance, props, and performers. Almost everyone, especially the chief and his followers, were dressed in red outfits, the traditional colours of the Prampram Homowo festival. Almost everyone also had leaves around their necks. There were other special costumes like a man who wore a leather striped skirt with metal hangings. Throughout the procession, this man was doing some high spirited performances. The choreography is a very significant part of the celebration. Sometimes it can be planned and sometimes it is random. ~(Chelsea-Marie Somuah – MYP 5 Drama)

Dramatists can take inspiration from ceremonial traditions because some of the performances and activities that they do can be transformed for the stage. For instance, a woman acted as though she was possessed and got everyone to believe her. This made me learn about how to be dramatic when acting. ~(Cynthia Nutsuakor – MYP 5 Drama)

At the festival, I noticed that, as the chief strolled through the streets of Prampram, there were multiple dancers around him and multiple men guarded him while they interlocked their fingers. Throughout the trip, I witnessed different kinds of art forms such as dancing, sculpture and performances of different sorts. I saw a sculpture held by the chief’s spokesperson. He was holding a staff of a hand and the sculptured hand was holding an egg. As part of the sculptures, the chair in which the Chief- Nene Tetteh Waka III – sat was coated with gold and the ears of the chair was similar to the staff – with an egg in the hand of the sculpture. ~(Rudolph E. Dogbegah – MYP 5 Visual Arts) 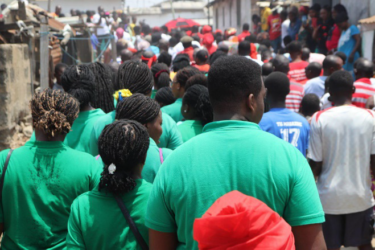 Most people were either wearing black and red and mostly wearing batakari or having some sort of adinkra symbols in their clothes. What caught my attention was when the chief had to sprinkle their traditional food,“kpokpoi”, around some places in the town to hoot at hunger and also feed the spirits in the town which I found very intriguing. Finally, to end the ceremony the chief’s executioner put on a show. He had metal rings and a straw-like skirt that he was wearing. The most exciting part of this was that he had a knife that he was using on his various parts of his skin and attempting to cut that portion which got me intrigued as no blood was shed and he was perfectly fine. One prominent art form I observed from the festival was textile. For example, the Asafo flag was red and had a wooden monkey at the top holding a sword. On the flag was the Union jack, a woman blowing a horn, an anchor, the sun, a canon and two writings which say Akuabea and Teshie. The function of this art form was to symbolise the commencing of the festival, the history of the Prampram region, how they migrated and also it was used as a way to symbolise that the chief was here, as they had not found a chief in three years. ~(Apewe Japora Chigabatia – MYP 5 Visual Arts)

The first musical element that was very prominent was the tempo. Throughout the whole festival, there was a drum that kept on playing at a fast beat. I think that this beat was to help time the chanting and the gunshots. The guns were also fired at a certain time after the ceremonial food was sprinkled on the floor, although I am not sure why. The drum tempo apparently sets a pace for some of the residents who danced alongside. The next element I noticed was the melody. There were many songs that were sung. Their melodies actually sounded very similar to me and I also saw that the chants/songs were usually call and response. Although I did not understand what they meant, I believe that since they were mostly sung/said either when the ceremonial food was being sprinkled on the floor or when the king was walking, they possibly were either about welcoming the spirits to eat with them or to praise the king.

Thanks for being part of the TIS family.