“Storytelling is the act of narrating an event. It can be classified under fictional and non-fictional. In our traditional African culture, it is usually shared as a mean of entertainment or as a form of transferring cultural and ethical behavior to younger generations.

Stories can be told in many forms such as photography, poetry, lyrics, fable, myth, legends, oral tradition amongst many others. As a good way to start the unit of, we had a workshop with Mr. Akoi-Jackson, a famous Ghanaian artist and former teacher in Tema International School. We had a few activities here and there to make the class livelier and more interactive. We watched the beginning of a movie to identify how music, art and drama could tell a story without words being said.

We were also instructed to pick a book and read for a while. After he asked questions about what we learnt. I thought this was a good exercise because at least everyone would be able to walk out with one new thing. The last activity I can recall is learning what his art program entailed and how he communicated his opinions to many unspecified people through art. A typical example was he using
a saw to cut through a chocolate bar to signify the brutal past that Africans had to go through. He then shared it amongst people without telling them what it meant. There were a few words that I took notice of in the classroom and wrote them down because I felt it was useful. They are; Pseudonym in Akoi-Jackson’s words were ‘a stage name’. With this he continued to explain that many artists used a fake name to hide their identity from the world. A typical example that was discussed was Banksy, a well know English artist who vandalized walls of subways with inspirational quotes relating to art. He was known to write powerful phrases on the wall of train stations amongst others including the famous ‘art must be able to disturb the comfortable and comfort the disturbed.’ Another key word discussed was ellipses. In literal meaning, it is used to say that there’s more to a story depending on the situation. Sometimes it could even be used as a way of building suspense from the viewer but it is indifferent from what artists consider point of ellipses. Pastiche is a word that originated from Latin. This is when an artwork is imitated as either a form of mockery or to improve. The Mona Lisa smile is an example of a painting that has been remade several times; mostly out of fascination according to sources. All in all, I believe that this workshop was extremely helpful and eye- opening experience I’m happy to be a part of. Not only will this help me with my E-portfolio but will also help me in seeing life in multiple perspectives.”~(Ewuraba Benyarko, MYP 4 Music)

From the workshop I learnt that, stories can be told in many ways by many means. For artists, stories can be told through their art. For example, if in a painting there is a cloudy, dark street in the Victorian era. If there is a man standing in the middle of the street in a funny stance that tells a story. Stories can even be told by artists through their use of colour and the different shades. ~(Andrew Opuni, MYP 4 Visual Art) 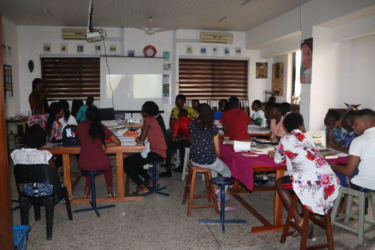 The workshop we had on Sunday was a very insightful one. My general impression on it is that, it was very informative and we spoke at length about the many different types and forms to tell a story through art. Our facilitator was Dr. Bernard Akoi-Jackson a former art teacher of the TIS community. He told us about the different tasks that the MYP arts entail. The first task, understanding and presenting concepts, the second task, developing your own work, the third task, creating your own work and the fourth task, critiquing your own work.

Overall, I think that the workshop that we had with Mr. Akoi Jackson was really helpful because we got to know how artists developed ideas to create their artwork and also learned how to perform storytelling in many other ways. I also enjoyed the workshop because I had a greater knowledge on how and where I can get inspirations from for my art. The environment can influence storytelling in different ways. For example, there is a protest in Accra about corruption and someone decides to put it in a narrative art form. It can also be the fact that the storyteller is experiencing something in his or her environment which is very painful so he or she might want to put it in a form of a story and show it to the audience. Storytelling can be used to create awareness of something, for example,‘awareness for malaria.’ It can also be used to inspire people. Storytelling can also be used to entertain people for different reasons and storytelling can make people think about what they are doing right or wrong in their daily lives. ~(Masere Nana Frimpong, MYP 4 Drama)