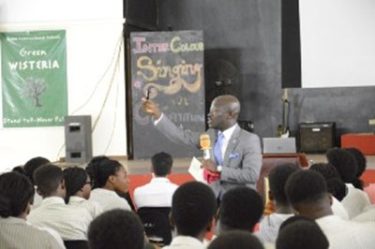 Mr. Joseph Ghartey, Head of the Narcotics, Ghana engaged the TIS community in a discourse on drug abuse. Students were educated on the risk factors of drug abuse and its consequences. The message was simple: “abuse of drugs, legal or illegal, is an addiction which leads to many of such consequences as death”. Students were encouraged to stay completely away from illicit drugs as well as taking their prescribed drugs exactly as shown by physicians.

In a second presentation by our guest speaker emphasized the need for internet security awareness. He cautioned students to be wary of documents and information they put up on the internet, via social media and other platforms. He explained that personal information uploaded on the internet entertains stalkers. He continued: “Once uploaded on the internet, it can never be erased permanently”, and he encouraged students to set up strong passwords to protect their emails and academic work to prevent ease of access by intruders. 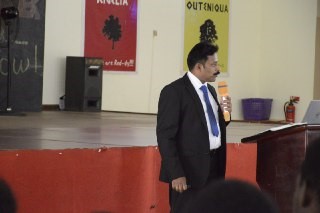 On Monday afternoon a special assembly was held to enlighten us on the topics of narcotics, drug abuse, and internet safety. The first presentation informed us about the harmful effects of the most commonly consumed drugs nowadays like marijuana and cocaine and how drugs can be made out of substances which were initially created for medicinal purposes, such as Tramadol and Benylin. This was interesting to hear about based on the fact that these are everyday drugs and medicines that are being used in harmful ways and how it can have both positive and extremely negative effects on some people, depending on their consumption.  I think this was a very important presentation for us since teenagers can easily get hooked onto illegal practices and other bad habits through peer pressure. I hope and believe this presentation will leave a lasting effect on us- India Agyemang G.11

During the Special Assembly, I heard many things, but one key thing I heard was “Don’t Do Drugs”. I thought that was very important since nowadays most teens have started electronic smoking, also known as “Vaping”. I think that it would be very important for them to stop because as the speaker said, you will get addicted and it will be so hard to stop. It was an insightful session. Tiffany Forson G.7

Monday’s special assembly was quite insightful as I learnt a lot about the use of drugs and its abuse. One thing that really stuck with me was the 5 stages; curiosity, experimentation, abuse, addiction, and destruction, and I learnt about really interesting drugs. Although I felt the session was too explicit, considering the presence of Grade 7 and 8s everyone picked up the key message quite well; “FLEE FROM DRUGS”. On internet security, I learnt pretty much how necessary it is to use passwords that aren’t related to you in any way. This way it makes it difficult for hackers to easily access your private information Judah Sesay G.11

Monday’s special assembly was very informative and interactive. We learnt a lot about internet security and how to set up strong passwords. I personally learnt that no matter how you delete information already uploaded on the internet, it will never be deleted. The first presentation on drug abuse also taught me a lot. People start using drugs and feel they can stop not knowing that it gradually becomes a habit they cannot stop. The two presentations taught most of us things we would rather overlook- Shaun G.9

Enjoy the rest of your day.