Students engaged in an activity by using a twine to create connections between countries. This was done to explain the concept of globalization and to highlight social (collaboration) as an ATL skill.

Below are the reflections of some of the students. 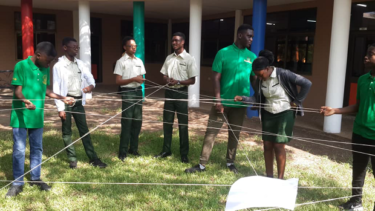 On 27 August, we had our second Geography class. During the class, we discussed what trading was all about, and afterwards delved deeper into the unit by discovering the key concept (change) and the related concepts (patterns and trends; globalization). Next, we were asked to use one word to describe globalisation. This short exercise gave me a clear understanding of globalisation, because I realised that I had the ability to relate it to something else. Next, we went downstairs to perform an experiment on international networks. I gained that we can relate it to the saying “united we stand divided we fall”. This is because when people started dropping the twine, it became looser and weaker as compared to when everyone was holding it. Therefore, I concluded by saying everything is better when done as a team. The ATL skill I gained from this was social. As I stated earlier, that when we come together, we are stronger. ~Lexi Forson

Today, we studied about Trading in a global village. To understand this, we were made to use a twine to create connections between countries. The activity made me understand that, no country can stand alone and survive without trading with other countries. ATL skill such as social (collaboration) was developed, as we used the twine to create a web of countries to depict globalization. I realized that, conflict and lack of resources are major issues that affect trading among different countries. ~Daniel Markin Jr 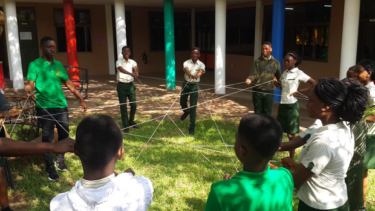 Our teachers gave us a twine to create a network of countries to explain the essence of bond and connections. During this task, each person was to pick a country each, pick what that country trades in and then throw the twine to any team member of our choice. As this went on, I observed that as everyone held the twine, it became stronger and no one could pass through. It taught me teamwork because everyone was working together to keep the twine stronger. This made it clear to me that countries depend on each other and no country can be an autarky. ~Karen Quarshie

When I got the twine, the country that I chose was France and said they produced wine. After, I held some part of the twine and threw it to one of my classmates. When everybody was done, I realized we connected to other countries by the twine and that showed the connection that each of us had. Our teacher asked a question on what could break the relationship of globalization between the countries. Some of my classmates said it could be because of high prices, less resources, ban of goods by a government and many more. Today, I learnt what globalization really is and how it applies to most countries around the world. ~Nana (Masere) Frimpong

Enjoy the rest of your day