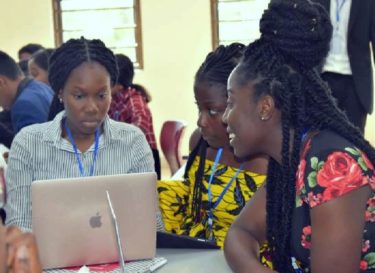 GIS MUN was a very eyeopening experience for me as it was the first time I went for a conference of that sort. For MUN, most of the work occurred before the conference. The research and preparation process was the most rigorous and enjoyable part of the whole experience. I had to be extremely conversant with the topics at hand, my country’s policies and how they aligned with other countries in my committee.

This has increased my international mindedness exponentially. Now, I am well-equipped with in-depth knowledge of West Africa’s
planned implementation of a new currency, as well as the US-China trade war. Apart from that, I also learned to speak better in front of a crowd and convince people to align with my proposed resolutions. I additionally had to think critically- to respond to questions from the
point of view of my assigned country (Germany). All in all, GIS MUN was an extremely insightful learning experience- one I can’t wait to repeat again. ~Charity Apreku

My GISMUN experience was astonishing. My field of interest has always been the sciences and never in my life had I thought debating on global issues would be interesting. However, this MUN proved me wrong. The first few days I was reserved, but as I got more comfortable, I was able to get involved in the debate. This experience has taught me that it’s all about taking risks and that you should never shy away from expressing your opinions on something when given the oppo rtunity to speak out. I encourage everyone to go for the next MUN as it’s a choice I took and will never regret. ~Isabel Prempeh

The MUN conference was a very  different experience for me. I have participated in debates and contributed to discussions in which I had speak publicly, but MUN was a whole different ball game. The procedures alone made it hard; from POP to POI. I had to learn all of these on the spot, as I was a new delegate, and use them wisely. According to most people, my committee was one of the biggest and talking
about one of the most crucial problems in the world today, the Ebola outbreak in DRC and weak health systems in conflict and post conflict zones. In the WHO, the only thing I really needed to have prepared was my Opening speech and it was under one minute and  supposed to be attention grabbing, a task that is not as easy as it seems. As a new delegate I took the risk of talking at most of the opportunities given and contributing to the conversations even though my country, Burkina Faso, had nothing to offer. 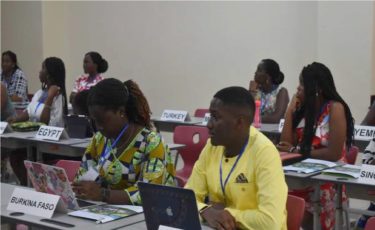 I had to be careful with my words not to cause conflict or to be attacked and lose my allies. In all, the experience was great, meeting new people, learning new things and stepping out of my comfort zone. I highly recommend anyone to sign up when the opportunity arises as it
won’t be an experience you will regret. ~ Adoma Agyare

MUN was a very enjoyable experience, I got the chance to meet new people and I also got to feel like I was in an actual UN conference. It thought me to see the world in a difference way and see it in the perspective of many countries and I also got to debate and improve upon my public speaking and thinking skills. ~Iddrisu Razak

My first ever MUN conference was possibly the best experience I could ask for. Throughout the preparation process I was really nervous because I didn’t know how to prepare adequately and I was really scared that I would end up not doing well. Immediately the conference started, I was feeling a bit shy to express any thoughts or any opinions, but I rose my placard once and spoke, and after that, I thought to myself “I can actually do this”. After putting my heart and sweat into arguing for some solutions to global issues, I was one of the people
awarded and I was presented with the “Best new Delegate”. I was really proud of myself and I encourage everyone to try it out next year. ~Hamdia Ibrahim

GISMUN was my first local MUN so you can probably imagine the high tensions I had when walking into my committee for the discussions. The first day was quite slow as most of us were new to the procedures so the aim was to just familiarise ourselves with the proceedings and everything we need to know about MUN. The subsequent days just kept getting better each day! The experience was fun for me because my country (China) had VETO power, so I was able to overrule or accept anything I wanted. The experience as a whole was very eye-opening and engaging, so I encourage everyone to sign up for next years’ event. ~Arnold Gyateng

I was lucky enough to take part in this years’ GISMUN. I faced so many challenges during the MUN as a result of joining the night before the conference began. Fortunately for me, and with the help of the other delegates who took part, I was able to write my opening speech just before the chairs required us to read it out. This was the first MUN I had ever taken part in so I didn’t have any knowledge about it at all, but I was able to adapt to the system on the second day of the conference. I will say that this experience has enabled me to come out of my shell and correctly argue out points I would like to put across when necessary. ~Emelda De-Veer