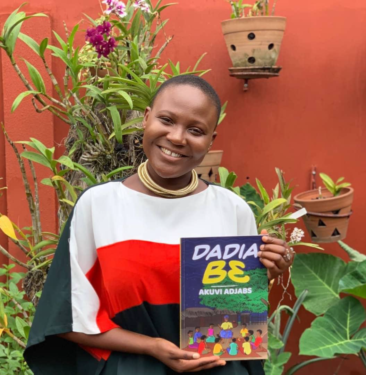 Akuvi Adjabs is a personal style blogger, creativity developer and a confidence coach. She is the founder of Quinsera Confidence  Campaign Initiative, a platform that empowers young people, especially those living in underprivileged communities to identify, nurture and monetize their creative interests and skills as well as going the step further to develop and build self-confidence so they can assume the power to make meaningful life informed decisions. Akuvi also works for Christie Brown as a Retail Associate and a Fashion Merchandiser.

Her maiden book, “Dadia bɛ” which means “Grandma Says” highlights the petty self-esteem issues children face while growing up and how they can use their creative potentials to manage the situation. The book is a memoir of Akuvi’s three friends’ childhood years and confidence crashing stories, children can relate to. It is an educational campaign tool to foster the desired difference in communities, Ghana and beyond. Akuvi equally draws inspiration from the numerous events that she had been involved over the past the few years in putting together this piece. One key thing that she cannot overlook is the issue pertaining to confidence – self-confidence. And that is the foundation of the Campaign Initiative which led to the birth of her premier book.

Dating back to 2016, with the unwavering support of her team she has been reaching out to children with and through creative skills-led educational activities in ten impoverished communities within the Adaklu District in the Volta Region. These children were trained in various creative arts subjects including but not limited to weaving and stitching, crocheting, ceramics, making pictures and colour work, memory and imaginative drawing as well as music and dance.

Akuvi believes children face a lot of self-esteem and confidence issues, most of which they are unable to voice out. She appreciates art as a
language through which children can express their thoughts which they are unable to verbalize and thus intends to empower children to use their creative potentials as an effective tool for communicating, which could help them build self-confidence and in turn become self-sufficient while they grow in this ever-changing world.

The book is set to be launched in Tema International School on Thursday, 5 September 2019. She is looking forward to collaborating with individuals and organizations who share the same dream so they can educate the world, a kid at a time.

Thank you for  being part of the TIS family.